Thank you for stopping by and sharing my world. Enjoy, leave a comment if you desire and return at your convenience. 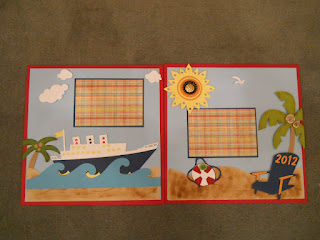 Its Saturday and there's lots to be done but I wanted to stop in and share this LO. This is a two page LO that we created while on the cruise, I'm not sure what pictures I'll add but I wanted to share it now rather than later. We had overview classes for the the Imagine, the E2, the Mini and the Craftroom. I have mixed feelings about what I learned mostly because I don't have an Imagine or E2 and I'm not sure about the Mini or the the Craftroom. I'd rather not be tied to the internet to print so the use of the Mini and the Crafroom may be something I tackle later. Have a good weekend and check back later for more cruise sharing!
Posted by Treva at 2:41 PM

A very nice layout I really love the waves.

So amazing that you got to go on the cruise. Love the layout.

Treva
a mother, daughter, sister, wife, aunt, and strong advocate for children. I have two children an adult son and a 15 year old Princess. I love to scrapbook and make cards. I've been papercrafting seriously for over ten years; I'm learning new things everyday.